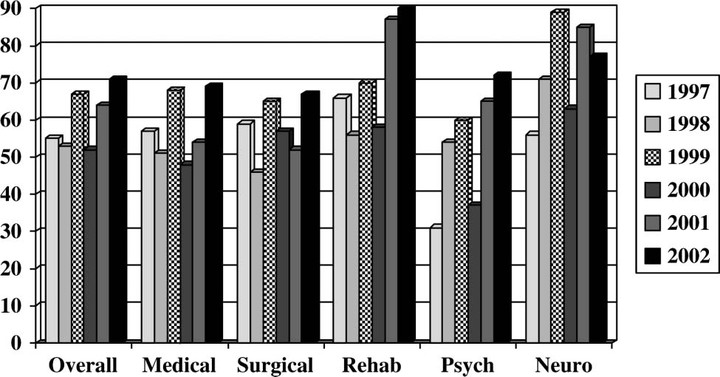 Objective: To describe the overall rate of falls during a six-year period in an academic acute care hospital, explore differences in fall rates and characteristics by type of patient population, and explore changes in rate of falls over time in relation to implementation of a hospital fall prevention program. Methods: The incidence of falls in hospitalized patients from 1997 to 2002 was examined retrospectively in a 471 bed academic medical center using occurrence screen data. Fall rates were examined overall and by time, type of population (medical, surgical, neuroscience, rehabilitation and psychiatry) and age groups. Results: In this six-year period, there were 1,932 falls in 1,562 patients for a fall rate (number of falls per 1,000 inpatient days) of 2.63. Rates varied by patient population with rehabilitation patients having the highest fall rate and pediatric patients having the lowest rate. Overall there was a significant reduction in fall rates of 23.69% average change per year (P = 0.006), however the rate of change varied significantly by population (20.05 to –12.2%). Conclusions: Caution must be used when comparing overall hospital fall rates. Fall rates vary significantly by patient population, therefore an overall hospital fall rate is dependent on the patient mix of the hospital. Hospitals with higher percentages of patients with medical, neuroscience, psychiatric or rehabilitation disorders are likely to have higher fall rates compared with hospitals with large surgical, critical care, pediatric and obstetric populations. In this study, medical, neuroscience, psychiatric and rehabilitation account for 40.9% of the patient days. The value of looking at falls by patient population and age groups over time is useful in targeting programmatic changes to specific patient populations.