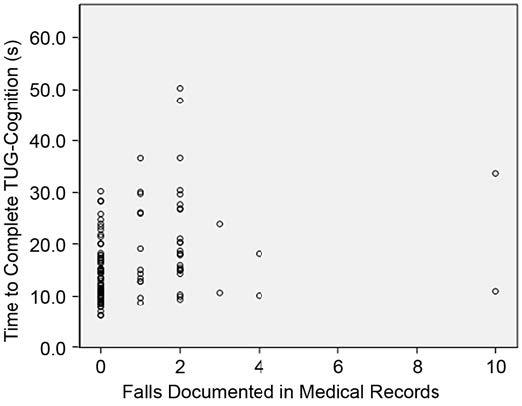 Falling is a serious hazard for older veterans that may lead to severe injury, loss of independence, and death. While the American Geriatrics Society (AGS) provides guidelines to screen individuals at risk for falls, the guidelines may be less successful with specific subgroups of patients. In a veteran sample, we examined whether the Timed Up and Go (TUG) test, including a modified version, the TUG-Cognition, effectively detected potential fallers whose risk was associated with cognitive deficits. Specifically, we sought to determine whether TUG tasks and AGS criteria were differentially associated with executive dysfunction, whether the TUG tasks identified potential fallers outside of those recognized by AGS criteria, and whether these tasks distinguished groups of fallers. Participants included 120 mostly male patients referred to the Memory Assessment Clinic because of cognitive impairment. TUG-Cognition scores were strongly associated with executive dysfunction and differed systematically between fallers grouped by number of falls. These findings suggest that the TUG-Cognition shows promise in identifying fallers whose risk is related to or compounded by cognitive impairment. Future research should study the predictive validity of these measures by following patients prospectively.