Accuracy of Wearable Trackers for Measuring Moderate- to Vigorous-Intensity Physical Activity: A Systematic Review and Meta-Analysis 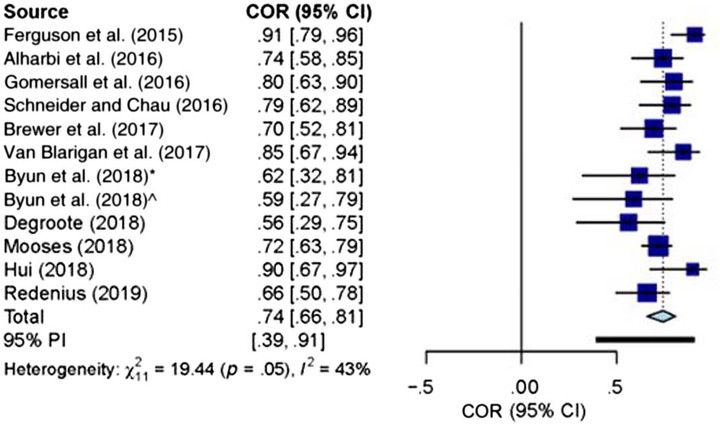 Background: The evidence base regarding validity of wearable fitness trackers for assessment and/or modification of physical activity behavior is evolving. Accurate assessment of moderate- to vigorous-intensity physical activity (MVPA) is important for measuring adherence to physical activity guidelines in the United States and abroad. Therefore, this systematic review synthesizes the state of the validation literature regarding wearable trackers and MVPA. Methods: A systematic search of the PubMed, Scopus, SPORTDiscus, and Cochrane Library databases was conducted through October 2019 (PROSPERO Q1 registration number: CRD42018103808). Studies were eligible if they reported on the validity of MVPA and used devices from Fitbit, Apple, or Garmin released in 2012 or later or available on the market at the time of review. A meta-analysis was conducted on the correlation measures comparing wearables with the ActiGraph. Results: Twenty-two studies met the inclusion criteria; all used a Fitbit device; one included a Garmin model and no Apple-device studies were found. Moderate to high correlations (.7–.9) were found between MVPA from the wearable tracker versus criterion measure (ActiGraph n = 14). Considerable heterogeneity was seen with respect to the specific definition of MVPA for the criterion device, the statistical techniques used to assess validity, and the correlations between wearable trackers and ActiGraph across studies. Conclusions: There is a need for standardization of validation methods and reporting outcomes in individual studies to allow for comparability across the evidence base. Despite the different methods utilized within studies, nearly all concluded that wearable trackers are valid for measuring MVPA.