Examining the Association between the Gastrointestinal Microbiome and Gulf War Illness: A Prospective Cohort Study 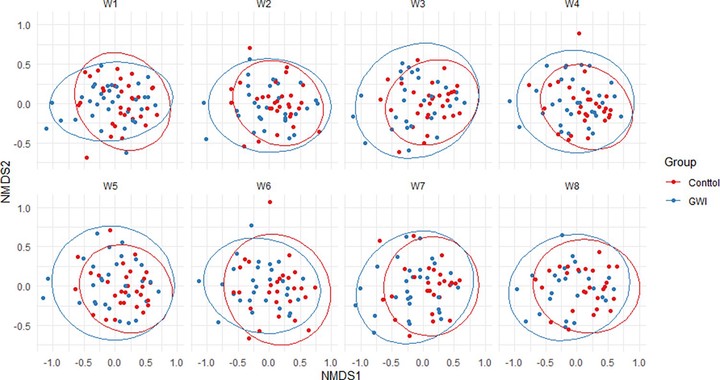 Gulf War Illness (GWI) affects approximately 25-35% of the 1991 Gulf War Veteran population. Those affected experience a wide range of symptoms including pain, fatigue, cognitive impairments, gastrointestinal dysfunction, skin disorders, and respiratory symptoms. Longitudinal studies have shown patients with GWI have had little to improvement in symptoms since their diagnosis. The gut microbiome and diet have been shown to play an important role in overall health and preliminary research has shown the gut microbiota may play a role in GWI as well. To examine the relationship between the gut microbiota, diet, and GWI, we conducted an eight week prospective cohort study collecting stool samples, medication and health history, and dietary data. Stool samples were analyzed using 16S rRNA sequencing on the Illumina MiSeq. Sixty-nine participants were enrolled into the study, 36 of which met the case definition for GWI. The gut microbiome of participants was very stable over the duration of the study and showed no within person (alpha diversity) differences between groups though beta diversity was statistically different between those with and without GWI. Several taxonomic lineages were identified as differentially abundant between those with and without GWI (n=9).