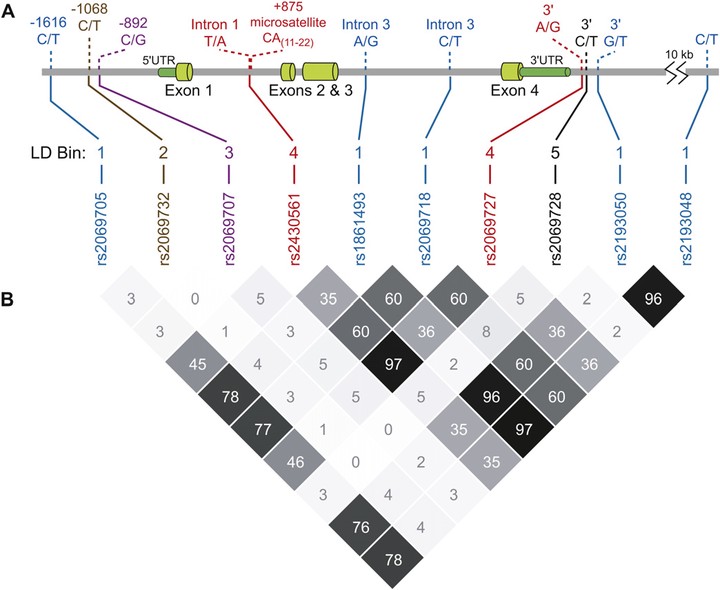 BACKGROUND: Asthma is a complex disease characterized by sex-specific differences in incidence, prevalence, and severity, but little is known about the molecular basis of these sex-based differences. OBJECTIVE: To investigate the genetic architecture of sex differences in asthma risk, we evaluated (1) associations between polymorphisms in the IFNG gene and childhood-onset asthma in combined and sex-specific samples and (2) interactions between polymorphisms and sex on asthma risk. METHODS: Main and sex-interaction effects of IFNG genetic diversity on asthma risk and IFN-γ levels were examined in a birth cohort of children at high risk for asthma and allergic diseases. Replication of the genetic association was assessed in an independent sample of asthma cases. RESULTS: Significant genotype-sex interactions on asthma were observed for 2 IFNG single nucleotide polymorphisms, rs2069727 and rs2430561, which were in strong linkage disequilibrium with each other. In contrast, none of the 10 IFNG single nucleotide polymorphisms showed significant main effects on asthma. The observed genotype-sex interaction on asthma was characterized by nonadditivity; that is, heterozygous boys had the highest risk for asthma, and heterozygous girls had the lowest risk. The interaction effect was robust to other asthma risk factors but was limited to children who experienced wheezing illnesses with viral infections during the first 3 years of life. Genotype-sex interactions were also observed in the IFN-γ response to LPS in the first year of life. Finally, the sex-interaction effect was replicated in an independent population of childhood asthma cases. CONCLUSIONS: These results provide insight into the genetic basis of sex differences in asthma and highlight the potential importance of interactions among sex, genotype, and environmental factors in asthma pathogenesis.